Jack in the What?

Look...Jack's in the pulpit!! Nope, I'm not at church. This time I was wandering beneath some pines and came upon this rather large Jack-in-the-pulpit (Arisaema triphyllum). 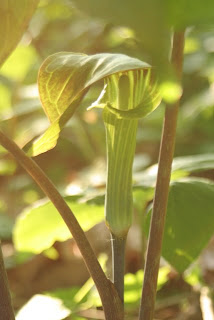 According to the Veterinary Medicine Library at the University of Illinois, the Jack-in-the-pulpit is poisonous to animals. The corm (i.e. the underground plant stem that looks like a tuber and stores starches/energy for the plant) of the plant contains calcium oxalate crystals, possibly an alkaloid, and volatile acrid compounds. Apparently, it is "gathered, dried and sold by drug collectors". Some of the lovely side effects: 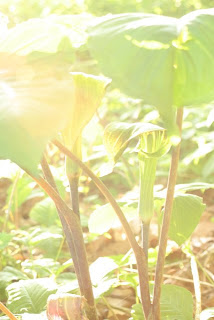 According to one website - "It is reported that they also used it diagnostically by dropping a seed in a cup of water and if the seed went around four times clockwise the patient would recover and if less the patient would die." - I think that's really cool! What a great way to diagnose people. Plus the seeds (which are out in Fall) are a beautiful red color, so this would be a very suspenseful tradition!