After graduating high school, I had a loose connection to football and had learned the rules of the game from some very patient friends from Fallston High School and C. Milton Wright High School, but I couldn't pledge my allegiance to any one team. Of course once I started school at Penn State, they became my college football team (and what an awesome team to claim as my own!). As a student at Penn State you had an obligation to pretty much choose between the two major Pennsylvania rivals, the Pittsburgh Steelers and the Philadelphia Eagles. And my choice...the Steelers! This came about for several reasons:
And thus, the Steelers became my NFL team. And boy did I pick right! The Steelers won the Superbowl this weekend which was coincidentally held in Tampa. Now, although there was no way I was getting tickets to the game itself, I decided that this may be a once in a lifetime opportunity. When would I ever have this kind of luck again...not only was the Superbowl in the same town I was living in, but my favorite team was playing in it. I had to go out and support them. So with a little help from my landlady and a lot of help from my boyfriend and his friend, Rebecca, I made it to a Tampa Superbowl tailgate!! Woohoo!! 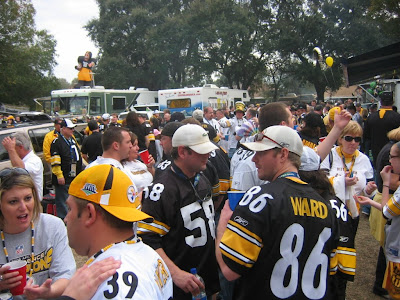 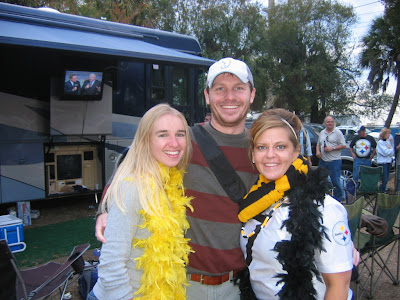 woooo....just remember who took you to your first steeler bar in maryland!! glad you had fun...i had a blast over there

Thanks Bill! I definitely have to credit you for turning me into a Steelers fan! Thanks for the push in the right direction!