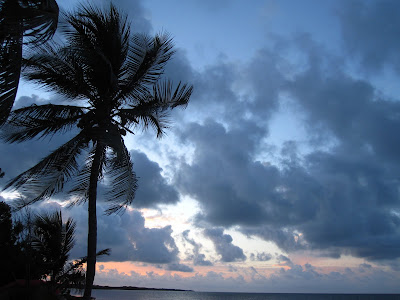 After an amazing afternoon of snorkeling in Lower Matecumbe Key, I was ready to peddle quickly to Long Key State Park to get to the ranger station before the park closed. 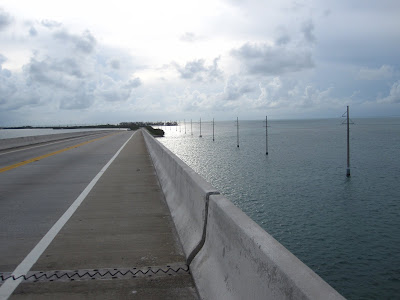 I consistently had at least 5 feet of shoulder at all points on the road through the Keys, sometimes even 10 feet. And to top it all off, there was virtually no debris along this shoulder. Within 100 miles, I went around 1 piece of tire. That's it!! I assume they do road shoulder cleaning, because this was amazing! Many thanks to the road workers who made this possible! 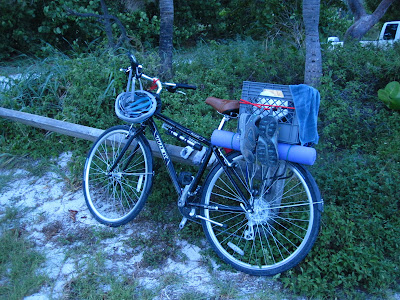 Ten miles later, I had made it to the park, checked in, and started setting up my tent on campsite #6. All campsites within this park are located directly on the ocean! Amazing! As I struggled to set up my tent in the great wind that was coming off the ocean (chasing after it at least once as it rolled across the camping street), I assessed my neighbors. 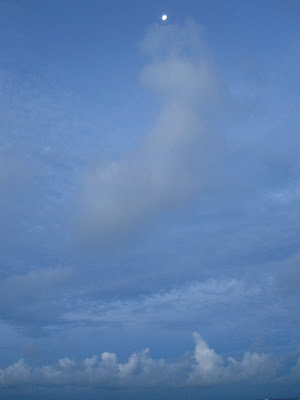 This campsite was also quite public, which I appreciate as a solo traveler, but less so than the one at John Pennekamp State Park. My neighbors were both tent campers, which I really appreciate since they are much quieter than RVs. As I struggled to stake in the tent, neighbor John came to introduce himself and offer me his hammer, which I gladly borrowed. 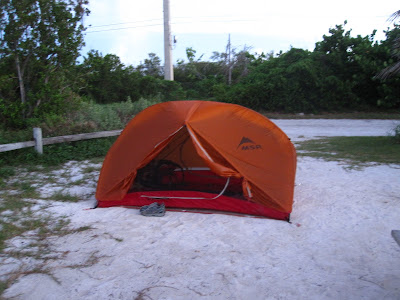 He was a sweet older man from Lantana (near where I lived in Delray Beach), whose tent had collapsed in the night, leaving him with his truck to sleep in. He confessed to me that his truck door had fallen off in the evening as well! Yikes! Despite his hard times, he seemed pretty content with his situation. Granted, we're at the beach, with the wind dispelling the bugs and the heat, the sun is setting in gorgeous pinks and blues, and we're on island time...what's not to like? I offered him part of my last juicy mango to thank him for his generosity. 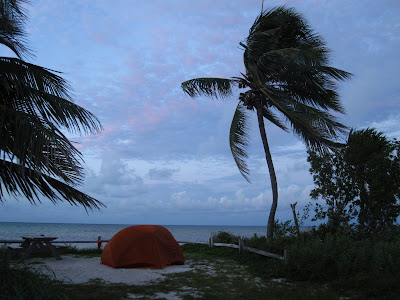 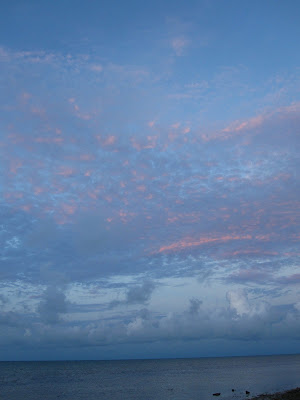 As the colors of the sunset graced the sky, I sat at the picnic table listening to the small ocean waves lapping on the beach just 30 feet from my campsite and the coconut palm fronds tinkling in the wind like rain. 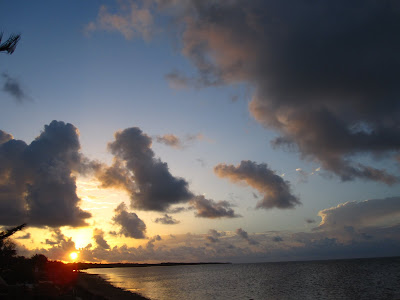 Highway US-1 is located parallel to the beach on Long Key State Park, so there were also the sounds of a few cars passing. Luckily, traffic on the islands basically ceases around 10pm, so I was left with the sounds of nature to lull me to sleep.

After a lovely evening in the tent, I woke to my alarm at 6am. I watched the sunrise from my tent and promptly went back to sleep for a little more shut-eye. Around 9am, I quickly woke up and extracted myself from the tent that had now become a sauna. I packed up and hit the trails in the park to explore. I found a great trail called the Golden Orb Trail which twisted through the mangroves. 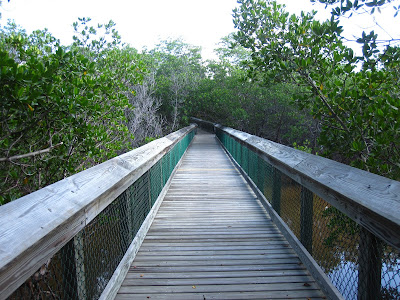 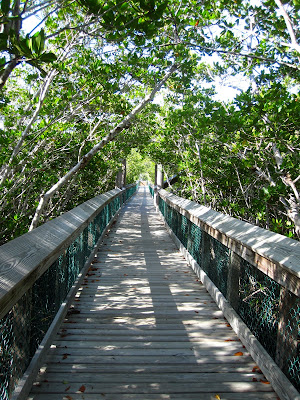 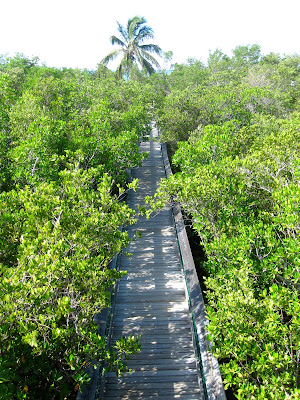 Along the beginning of the trail, I explored the wooden plank bridges, the outlook tower, and the pavilion-like cabins the park has for more secluded camping (I didn't know these even existed, but look how great they are!). 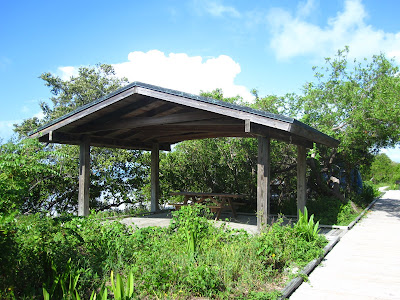 One of the cabins had a camper who looked like he'd made it his home for quite a while...beautiful! 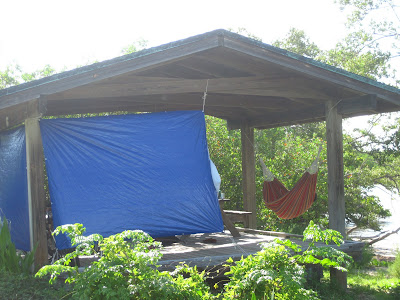 I decided to head on down the keys soon after my short exploration to make the most of the sunny, clear day. As I was heading out I saw this sea turtle that had washed up to shore and died. I'm not sure why it hadn't made it, but based on the orange spray paint X on it's back, I assumed that it had been reported and recorded by local naturalists. 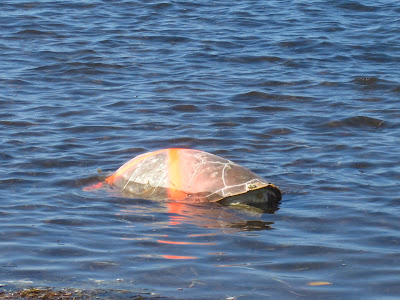 I tried to grab a water from the vending machine to fill up my hydration pack. I had to ask some other campers for change for a $5 bill, and I was again surprised by the friendly folks when they gave me an ice cold water from their cooler. Thanks! 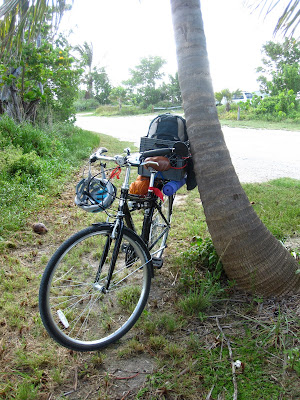 Here's a fun shot I got on my ride into Long Key State Park. Yeah, I couldn't help myself at this mile marker! Also, check out my crate. The wet towels dried using this method and so did my shoes, but it make me look like a hobo. Let's just say, that the hobo look combined with lots of sweatiness made me less conspicuous as a blonde riding alone through the Keys! 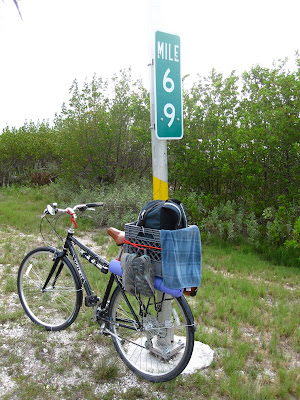 Now, on to Bahia Honda State Park for the next adventure-filled day!!
Posted by Unknown

It must be wonderfull to meet so many friedly people on this trip.
Have you reported the turtel to the ranger?

Yes, the people are absolutely amazing! Everywhere I go, I have been meeting wonderful people who offer to help me, give me useful advice, and are generally excited by my trip. The generosity of strangers is astounding and very much appreciated!

And the turtle was already marked with spray paint as if it had been recorded, so I did not report it. It was very close to shore and in sight of the park road, so I'm sure the ranger had seen it already.