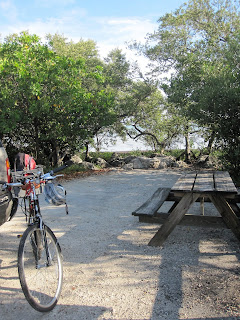 Friday morning we woke up early...well, George woke up early and went riding around the park, and I woke up when I woke up (I'm still not a morning person). We packed up, parked his car in the marina parking lot, and headed south. The bike paths from here to big pine were lovely. There were many beautiful fishing bridges and lots of great bike paths. As we were entering Big Pine Key, we began to notice that we were on elevated bike paths. This is because the National Key Deer Refuge on Big Pine Key harbors a small population of endangered deer called Key Deer (Odocoileus virginianus clavium). They are a subspecies of the common Virginia white tail deer that has become miniaturized due to harsh environmental conditions on the island. The subspecies population in the Florida Keys is estimated to be between 600 and 750 individuals. The highway is elevated along a short stretch of Big Pine Key to allow the deer and other species to move freely in their habitat. Apparently, there are 17 federally listed threatened or endangered species that are protected by the National Key Deer Refuge! 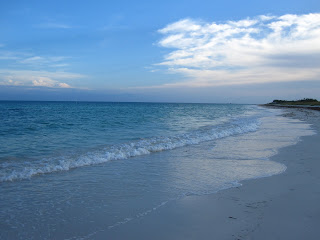 As we rode into Big Pine Key we saw two very tiny key deer fawns curiously eating below us. Like white-tail deer up north, these fawns had small white spots, however they were probably only about 2.5 feet tall. So cute! We later saw two adult key deer that were quite a bit bigger. We learned that the locals and tourists feed the deer and as a result the species is becoming larger. Hmmm...does that mean that someday the population will be considered white-tail deer again rather than a subspecies?

Around 10am, once we had arrived on Big Pine Key, we rode north to find a place that had been recommended to me called “No Name Pub.” Along the ride we rode through beautiful, sparsely developed hardwood hammock habitat where key deer thrive. In northern Big Pine we found the pub, but it wouldn’t open for another hour, so we decided to head on. On the ride back to Route 1, we found the National Key Deer Refuge headquarters and some breakfast at Coco’s Kitchen. While we ate, an ominous thunderstorm rolled in and started to pour. In an optimistic streak, we headed out of the cafe during a lull in the storm and started to ride west again. Within less than a block we were rained out and sought shelter under the awning of a CVS pharmacy. Unlike typical Florida storms that last for 20 minutes, this storm was persistent and we were stranded for about an hour. Under the awning we met several locals who were unemployed due to the economy and down on hard times. Sadly, this area was hit very hard by the recession and business is slow to come back, causing high homelessness among the locals. 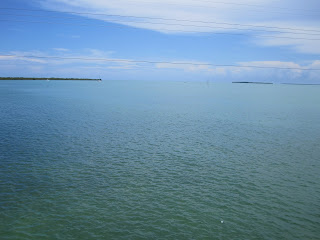 Once we got back on the road and started splashing through the foot deep puddles, we were ready for some refreshing beverages. Looe Key Tiki Bar was our first find after Big Pine Key. This stop is located just after Torch Ramrod Channel, my favorite named channel on the ride. For future reference, the Looe Key Resort has a great tiki bar, hotel, restuarant, and a pool for use. Apparently, so of the best snorkeling in the entire continental USA is right at Looe Key. Also, bar patrons can use the refreshing looking pool, which would be perfect during a hot and sweaty bike ride. Mangrove Mama’s, a delicious homey local restaurant in Sugarloaf Key was our second stop where we had fruity cocktails served in mason jars. From there, we hit each interesting looking restaurant, tiki bar, or dive bar along the route. If you are ever considering this ride, a little pub crawl bike-ride into Key West is for certain the best way to enter. It is like a small ceremonial parade welcoming you into a city known for its relaxed, island spirit. We spoke to the locals at each stop and got some great suggestions for local stops. The lovely bartender at Mangrove Mama’s asked us if we’d seen the bat tower as if it was a world renowned monument. She actually said "you haven't seen Key West until you've seen the bat tower." Of course, we hadn’t, but our curiosity got the best of us and we inquired about its history. Supposedly, the bat tower had been constructed in the early 1900s in an attempt to use bats as a biological control for the abundant mosquitoes in the lagoons. Unfortunately, the project failed miserably, and the bat population flew away, leaving the mosquitoes to flourish. We felt a responsibility to check out the flopped project and found it to be a random historical novelty.

Our trail also took us to Bobalu’s Southern Cafe and Hurricane Joe’s Bar and Seafood Grill. By this time, we had ridden about 45 miles and had about 5 more miles to get to the rental car place before they closed. The stretch from Bahia Honda State Park to Key West was the longest (about 50 miles with all the diversions) of the four day bicycle ride, but it felt great and very satisfying. We barely made it to the rental car office before they closed, we locked our bikes to a bike rack, and drove back to Bahia Honda State Park to retrieve George’s car. Yes, I know this sounds funny, but we couldn’t think of a better way to get his car back, and it was cheaper than getting a taxi. We had a late dinner at Hogfish Restaurant (a great restaurant off the beaten path) and made it to downtown Key West for last call. Let’s just say, the people watching at Sloppy Joe’s Bar and Durty Harry’s around 2am are fantastic!

Welcome to Key West!! We made it!! What an accomplishment. This was the best trip I have ever taken! Although lots of people had warned me of potential issues with traffic, camping, and strangers, I never ran into any trouble and had a wonderful time. Besides a little bit of saddle soreness, I felt fantastic. The multiple stops, leisurely pace, and the great campsites spaced at about 30 miles apart, made the trip effortless and relaxing.