Since Kew Gardens has based this year's summer festival on edible plants, aptly named IncrEDIBLES, and because I love edible botany, I've been thinking some more about which plants we could eat. Although most of the time ecologists want to protect plants and increase biodiversity, there is one particular time when most ecologists will agree, the plants must be destroyed, eradicated, extirpated from an area. I know this sounds harsh, but I'm talking about invasive exotic species. These are pest species which have come from other habitats, often other countries, and they love their new habitat so much that they out-compete local native plants. Such invasive species can eliminate local endemic species, reduce the number of once common plants, disrupt the ecosystem and all the ecosystem services that it once provided, and be a real headache for habitat managers and gardeners alike.

Today, I came across a new book that has just been published in my home area of Maryland called A Quick Guide to Wild Edible Plants: Easy to Pick, Easy to Prepare. One of the wild edibles mentioned in the book is tearthumb or mile-a-minute weed (Polygonum perfoliatum), a nasty invasive plant that plagues our home in Maryland by climbing over plants, smothering my mother's wonderful garden, and becoming larger and more problematic every year. So I am delighted to find out that it's berries are edible!!

According to the US Forest Service, Mile-a-Minute weed is edible by humans and has a high potassium content. Does this mean we could skip imported tropical bananas and eat seeds from the garden instead!? And, based on the following excerpt from a journal article written about Mile-a-Minute weed, it is not only edible, but it is also use in Asia as an herbal medicine and could even be used as an anticancer agent! I wonder, if we started eating the seeds if it would cause even a small dent in the speed this invasive is taking over?


CURRENT AND POTENTIAL USES
In its native eastern Asia, mile-a-minute is considered beneﬁcial and has been used as an herbal medicine for over 300 yr (He et al. 1984; Hoque et al. 1989; Sook and Myung 1992; Yang and Kim 1993; Zhu 1989), or as an edible wild fruit (Bajracharya 1980). The plant also serves as a suitable food source for a diverse group of mammals, birds, and insects. Two protein kinase C inhibitors (PKC), vanicosides A and B; ﬁve diferuloyl esters of sucrose; and feruloylsucroses have been isolated from mile-a-minute plants (Sun 1999; Sun et al. 2000). PKC are involved in cell signal transduction and cell proliferation and are believed to be tumor promoters; thus PKC inhibitors could be used as potential anticancer agents (Sun 1999). Two well-known natural products, quercetin and beta-sitosterol, have also been isolated from mile-a-minute (Sun 1999). Beta-sitosterol is also reported to have anticarcinogenic properties (Park et al. 2003). The bioﬂavonoid quercetin has antioxidant (Boadi et al. 2003; Kumar et al. 2003; Pietruck et al. 2003), antiproliferative, and anti-inﬂammatory properties (Pietruck et al. 2003). 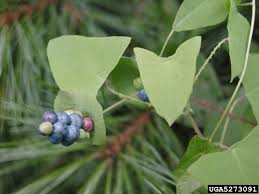 I think eating the seeds to reduce the spread of the plant is a very good idea. Do you have specifics on ripeness and how to eat the seeds?

Eating the seeds is a cool idea-but a terrible in the scope of a management plan. From the perspective of someone who wants to control this weed in their yard, you should be out hand pulling or raking plants as soon as you see them come up. Seed is the only method of propagation for these guys. You'd have to get every single berry off the bush, even the green ones because they have also been shown to have a decent germination rate. so, as far as eating the seeds goes. It's a nice sentiment but not really possible under a diligent, effective management plan because you wouldn't be allowing them to seed in the first place.

Quite the opposite! Marijuana is employed medically in American state within the treatment of cancer, AIDS, arthritis, migraines, and eating disorder. If you want to know more then please visit our Cannabis Stores in Ellensburg website.

Eating natural seeds is always beneficial and use of marijuana products for treatment of many deadly disease is also major concern. More management of plantation should be there for healthy living. You can visit weed delivery canada

buy weed online
Awesome work you did. Want to make like this one soon

FINALLY FREE FROM HERPES VIRUSI thought my life had nothing to offer anymore because lifebecame meaningless to me because I had Herpes virus, thesymptoms became very severe and bold and made my familyrun from and abandoned me so they won't get infected. I gaveup everything, my hope, dreams,vision and job because thedoctor told me there's no cure. I consumed so many drugs butthey never cured me but hid the symptoms inside me makingit worse. I was doing some research online someday when Icame across testimonies of some people of how DR Ebhotacured them from Herpes, I never believed at first and thoughtit was a joke but later decided to contact him on the detailsprovided and when I messaged him we talked and he sent mehis herbal medicine and told me to go for a test after twoweeks. Within 7 days of medication the symptomsdisappeared and when I went for a test Lo and behold I wasNEGATIVE by the Doctor Who tested me earlier. Thank you DREbhota because I forever owe you my life and I'll keep ontelling the world about you. If you are going through samesituation worry no more and contact DR Ebhota viadrebhotasolution@gmail. com or WhatsApp him via +2348089535482.he also special on cureing 1. HIV/AIDS2. HERPES 3. CANCER 4.ALS 5. HEPATITIS B 6.DIABETES 7. HUMAN PAPILOMA VIRUS DISEASE(HPV)8. ALZHEIMER 9. LUPUS (Lupus Vulgaris or LupusErythematosus