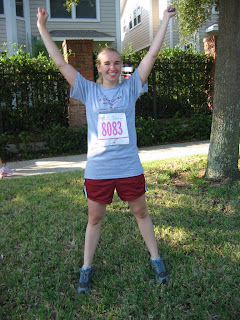 This is after the race, so please forgive the sweaty exhausted look!
The weekend of October 4 was a busy busy busy one! Somehow, my roomate, Karen, convinced me to run a 5k race. When she told me it was for breast cancer research I immediately said yes without really thinking about the fact that I'm not a good runner nor do I really enjoy the act of running. But by then it was too late. I was registered and on a team (with the Jolly Roger Hash) and the date was approaching. I decided that if it was too hard I would just walk it instead. So that morning, Karen and I awoke at the crack of dawn, drove to St. Petersburg, parked semi-illegally (the town was packed with hundreds of participants and not so much parking space!), grabbed our pirate hats and power walked to the start in Vinoy Park. Vinoy Park is an amazing place in and of itself, but I don't have much appreciation for such things at 6am, sorry! We got our team t-shirts, took some pictures (I have to get these from the team yet, so hopefully you'll see them soon), and before we knew it the race was beginning. Karen started first because she decided to bravely run the 10k. I was sticking with the 5k race and I knew even that would be difficult for me. 30 minutes later, the 5k race began. We all lined up at the start. They label the starting line with big signs that say something like "6 minute mile" all the way down to "20 minute mile". You are supposed to stand next to the sign that corresponds to the pace you think you will be running. Well, I started walking back to 10 minute mile, when my teammates pulled me all the way back up to the beginning of the starting line...apparently no one pays attention to those signs, so if you go that far back, you'll be stuck behind lots of people walking. Glad that I was there with people who had done this before. Well, to make this story a bit shorter, I ended up running the race in 29:12 minutes! Can you believe it? I ran 5km in under a 10 minute mile! That's a big deal for me! Granted, I almost passed out afterwards and I couldn't really focus my eyes for a good 10 minutes, but I felt really accomplished. Throughout the race, I definitely thought about giving up and walking...my lungs burned and my feet hurt...but as I was running I realized that this run really had nothing to do with me. It had everything to do with those people battling breast cancer and going through extremely grueling treatments. So who was I to minimize their struggles by quitting a race that really wasn't that long because my feet hurt a little bit? That just didn't seem respectful. So in honor of the fight against cancer that both my aunt and my mother endured for the past year and their bodies are continuing to fight into the future, I pushed myself to keep running. Thanks to the women in my family for never giving up and going through with the brutal and taxing treatments that will hopefully keep them in our lives for many years to come! 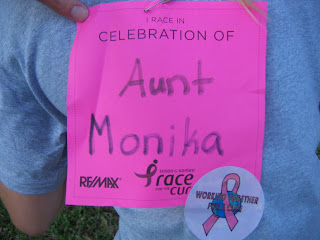 Aunt Monika was the person I honored for others to see on my back while I ran. Mom, you'll get a sign on my back too when that race comes to town!
Posted by Unknown