Yo ho ho and a bottle of rum! 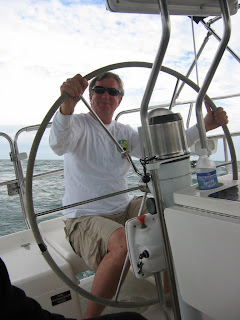 Just after the race for the cure, Karen and I stepped onto a beautiful 38 foot long Catalina sailboat with Captain Bill Sharpe at the helm! We were fortunate enough to be invited to join him on this amazing adventure leaving from The Vinoy Marina. We sailed from St. Petersburg, FL to Treasure Island, FL on Saturday and returned the same way on Sunday. This was my first time on a sailboat of such size and with such large sails. On Saturday we had a full boat with three guys on crew hoisting the sails with Captain Bill keeping us on course. One of our crew members was Chris Ross, a seasoned sailor who really knew what he was doing. 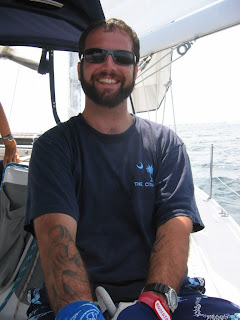 He even got us on keel (is that the right terminology?) going about 8 knots with the main sail almost parallel with the water (this means our boat was tipped over at about a 30 degree angle)! This was amazing! Did you know that ovens in the cabin of true sailboats have a thing called a gimbal that keeps the oven level with the horizon even if the boat is tipped over? This has got to be one of the coolest things ever invented!! 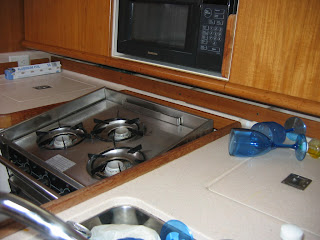 We sailed for about 10 hours on day 1 and on the way back we sailed again for 9 hours just barely beating a very heavy thunderstorm. Along the way we lost a few crew members when we docked at John's Pass Marina and gained a few at the same time. Coming into John's Pass, we gained access by calling the bridge keeper at the John's Pass drawbridge. Have you ever gone under a bridge that stops traffic and opens just for you? It kind of makes you feel like a king! Here is the crew: 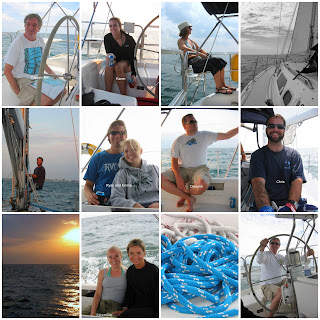 click on this image to see the pictures better
Also, we had a pod of about 10 dolphins sidle up to the boat and swim along with us for a few minutes! They were jumping and playing in our tiny wake. 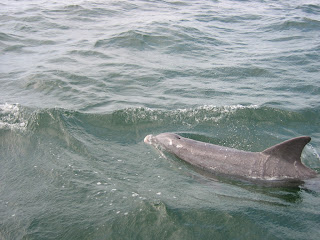 On the way back to St. Petersburg (when I was manning the jib!), we also spotted a school of thousands of stingrays (maybe the Atlantic Stingray) swimming on both sides of our boat out to the Gulf of Mexico. They were so graceful, gliding along and occassionally flapping a wing out of the water to wave us along. So peaceful! Thanks again Bill for a fantastic trip and to the entire crew for guiding us through safely!
Posted by Unknown