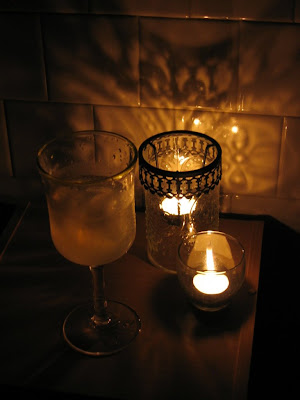 Well, I tried. On the night of Earth Hour I had just finished a long day of cleaning, organizing and bringing things to the Salvation Army. I was still organizing things, while my roommate, Karen, was watching the end of the basketball game. It was 9:00pm and all of our lights were still on. Woops! Right about then, we remembered it was Earth Hour and it was already half over!! Oh no. So we quickly switched off all the lights and electronics. We wanted to be part of this, even if we had already messed it up. So we lit some candles and went about things as always, just a little dimmer. Well, that proved to be harder than I had thought.

I was ready for a night out after working so hard on the apartment, so I grabbed my margarita (I had bought some limes at the Oldsmar flea market and needed to put them to good use) and headed to the shower. As I got to the bathroom, I realized that I needed at least a little bit of light to bathe. So I grabbed a couple candles and went back for another attempt. Let me just say, that showering by candlelight is very very romantic. Sure, I was alone, but it was very relaxing and sexy. Who doesn't look great by candlelight? Then the trouble started. Three things I learned:
Ok, next step...shower done, time to get dressed. I almost burned down my closet by holding a candle really close to my clothes to try to pick what I wanted to wear. To avoid a fire, I settled on the first t-shirt and jeans combo I felt with my hands. Ok, I was pretty much ready. By this point it was already about 10:00pm, but since we missed the first half of Earth Hour we felt that we needed to redeem ourselves by extending our lights-out time.

My next challenge was to give Karen enough light on her face to put on makeup. The small tealights I have weren't giving off much light, so I had to hold them pretty close to her face. I was a bit worried that the hairspray in her hair would burst into flames, but we did ok and she looked good (not just in the candlelight!). After blowing out all the candles, we headed out into the well lit night.

So I tried. I'm not sure how successful my Earth Hour was considering that even though I saved some power by turning off the lights and supported the movement, I wasted some precious water and almost started a few small fires. Is there a candle training course?

Did you participate? Check out these great pictures of landmarks that did.
Posted by Unknown

OMG! I LOVE this! I almost spit out my coffee...heehee. At least you tried and thatnk goodness no fires where started...xo! ;op