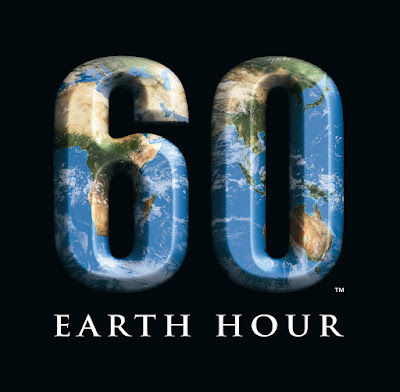 Did you hear about Earth Hour last year? It's a great idea that was initiated by the World Wildlife Fund in Sydney, Australia in 2007 to raise awareness for the need to take action against climate change. On the last Saturday in March, the World Wildlife Fund asks people to turn off their lights for one hour. In 2008 the movement grew from 2.2 million people to 50 million people participating. Everyone from individual citizens to businesses and even to global landmarks such as the Colloseum in Rome, the billboard in Times Square and the Golden Gate Bridge in San Franscisco participated last year. Oh, yeah, and my mom participated last year too! I think she told me about it, but I forgot when the time came to switch the light switch. But this year I'm doing it too! And this year it's going to be bigger than ever! Already, 1,189 cities and towns across 80 countries are committed to turning off their lights for Earth Hour. Who else is participating this year?
Will you do this with me and the rest of the world? Tomorrow, Saturday, March 28 at 8:30pm local time, switch off your lights and enjoy living for an hour without electric lights!

Are you going to do it?
Posted by Unknown