I recently took a trip to one of Florida's most beautiful and last remaining natural barrier islands with the Suncoast Chapter of the Florida Native Plant Society. The island, called Caladesi Island, was voted the nation's best beach in 2008. It was originally settled by a Swiss man named Henry Sharrer in 1883. It is now part of Florida's State Park system and is preserved without development. How lucky! The island is accessible via a short ferry ride from another barrier island to the north called Honeymoon Island.

While on Caladesi, we observed a large population of a native Florida shrub known as Necklace-Pod (Sophora tomentosa). It is a dense, multi-trunked shrub with beautiful rounded leaves, yellow pea-like flowers, and the neatest seedpods. The day we were on the island, a storm was threatening in the Gulf of Mexico and thankfully stole all the moisture from the air, leaving us with a perfectly sunny and extraordinarily calm day on the island. The plants in the understory of a pine and oak canopy were easily viewed in the sunlight. Although I've seen Necklace-Pod before, I've never noticed the brightly colored, symmetrically aligned orange petioles of the leaves. As you can see below, a petiole is the part that connects the leaf to the stem of the tree. This tiny nuance of the shrub was so beautiful! 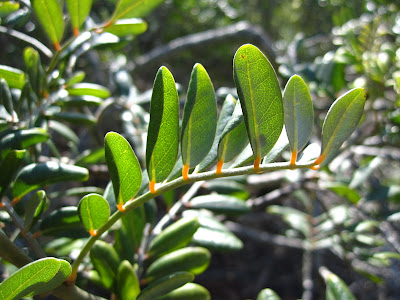 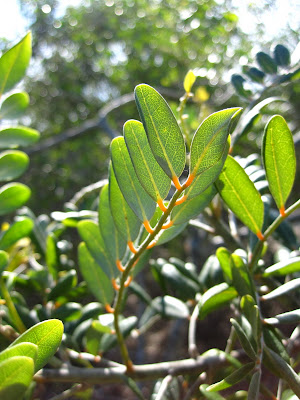 The pods look like the picture below. Seeing these pods, I excitedly cracked one open, expecting to see large beanlike fruits. This was not the case. Instead, a flurry of extremely small brown seeds poured out into my hand. Although I have a tendency to try to eat things in the wild, these didn't look so appetizing, so I dropped them to the ground. Good thing! Turns out the seeds are dangerous to eat. They contain an alkaloid called cytisine which causes nausea, vomiting, and acts as a laxative. None of those things sound good on a hike! 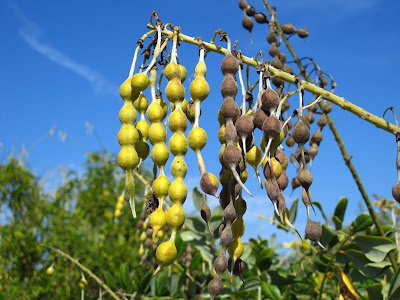 The bright yellow flowers bloom in a bright clump toward the end of the branches throughout the year. Apparently, they are well liked by many insects including this Monarch butterfly we saw feeding madly on these sweet flowers. The Monarch butterfly populations are on their fall migration pattern to Mexico where they will spend the winter. This individual wanted one last succulent taste of Florida before moving on. 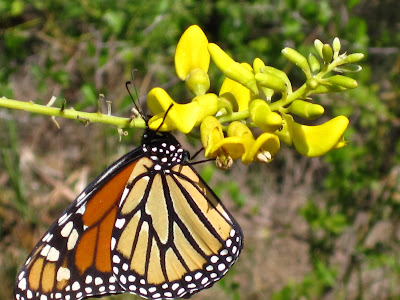 I hope you too are enjoying all the wonderful plant and wildlife happenings of this fall!
Posted by Unknown

These are great photo's that show nature. I had never heard of Caladesi Island it is great I stumbled across your blog to find it.

Kristina, what a great blog! Love your atmospheric conditions AND your photos. I have tons of necklace pods in my yard and had never noticed the orange petioles before! Thanks!

Thanks Tom! I'm glad you happened upon my random writings. Hope to see you back here again soon! Maybe you can share some great nature happenings in your neck of the woods.

Sue, thanks for taking a look at this! I'm really excited about what we're about to do with FNPS. Photos are definitely my favorite part of blogging! Talk to you soon!