Marshes and Sloughs...it's all Greens and Blues 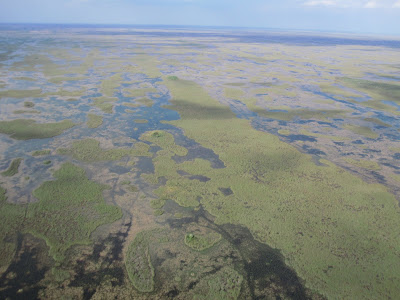 Today was a chilly morning to be in the Everglades. Yes, I fully understand that while the majority of the east coast of the United States is currently blanketed in snow, I'm commenting on a "chilly morning." And, while I have nothing to complain about, I just want all of you folks to know that on occasion, this subtropical ecosystem also gets a little cold. This morning was in the 30s.

During my introduction to the Everglades ecosystem, I have learned that historically, much of the area was topographically characterized by a simple ridge and slough system. The Everglades watershed, which historically included approximately 5 million acres (or 1/3 of the state of Florida), is naturally a relatively flat landscape where waters moves slowly as sheet flow toward the south. This means that water was not originally channeled through streams, rivers or canals in the Everglades as it is now. Water actually flowed very slowly in one large 30-mile wide swath, or slough, toward the south. The slough, known as Shark River Slough, was streaked with ridges running north to south composed of slightly elevated peatland where sawgrass grows thick. The areas known as slough, where water flows freely and the elevation is just inches below that of the "ridges," are characterized by open water with aquatic vegetation. Much of the area I am now conducting research in was once part of the natural ridge and slough landscape. Unfortunately, due to compartmentalization (the construction of canals and water control structures through the Everglades) and related water management activities, the natural ridge and slough system no longer exists in its original state. Many of the lower elevation sloughs have filled with sediment, resulting in a monoculture of sawgrass and cattails in many areas.

Evidence of the original ridge and slough habitat type can still be seen in some of the water conservation areas. Our view from the helicopter with the sun glinting off the water at just the right angle really helps to illustrate what this ecosystem looks like. 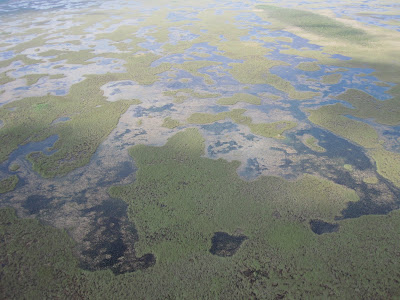 The green areas are the ridge and the blue/white areas are the slough. These streaks run north to south through areas of the Everglades. You can imagine the water running through these sloughs very slowly as it makes its way to the south. 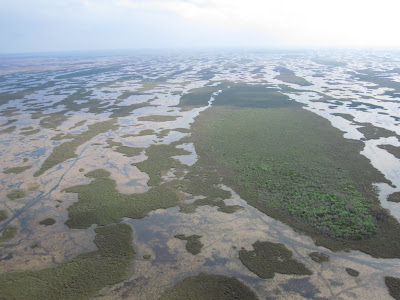 In most cases, the water running through these sloughs is very shallow, about knee to waist height. And the ridges are only elevated several inches above the sloughs. 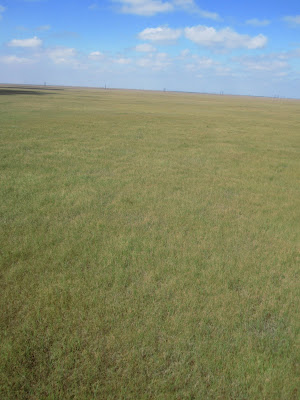 Many parts of the Shark River Slough now look like this photograph where the entire landscape is sawgrass ridge. This is the result of cutting canals through the Everglades to feed water to east coast communities such as Ft. Lauderdale, Miami, and West Palm Beach. Additionally, canals were originally cut in an effort to drain the Everglades to make way for development and "reclamation."
Posted by Unknown