Have you been paying attention to the latest disaster news? Well, this one isn't a natural disaster. It's a big ol' man-made disaster brought to us by the oil industry. On April 20,2010, a fire and explosion occurred on the Deepwater Horizon oil drilling platform in the Gulf of Mexico. This oil rig is located 50 miles south east of the Mississippi Delta in New Orleans, Louisiana. Reports of the incident have been a little mixed and sometimes confusing, so I've tried to get the best info out there. Deepwater Horizon is a drill rig operator for British Petroleum (BP). BP is now on the hook for cleaning up this mess...that is, if it ever stops leaking. Tragically, 11 people died in the explosion (out of 120 crew aboard). I am so sorry for those who lost their loved ones. Not only did this explosion affect human lives, but it has and will affect the economy, the fishing/boating/watersport industry in the Gulf of Mexico, many threatened and endangered species, sensitive coastlines, and many other resources in the Gulf. This map shows the extent of the plume thus far.

The US Coast Guard and the National Oceanic and Atmospheric Administration (NOAA) have responded quickly and appropriately to the situation. The Coast Guard is currently trying to contain the spill with floating booms, skimmers, tugs, barges, and chemical treatments. There were three places that the oil was leaking from the rig after it exploded and sunk (one was just plugged yesterday). By the way, "leaking" is a weak word for this, because estimations say that there may be anywhere from 1000 to 5000 barrels (or more) "leaking" out of the drill rig daily (that's upwards of 210,000 gallons/day!! This volume in any other context would be considered a flooding!). Some sources are predicting that the scope of this disaster may exceed the 1989 Exxon Valdez disaster.

The oil spill plume is currently heading toward sensitive shorelines in Mississippi, Florida, Louisiana, and Alabama. Already, fishing has been restricted in federal waters of the Gulf of Mexico directly adjacent to the area closures. Fishermen in the area are devastated by this issue and you know I won't be eating shrimp or fish from the Gulf for a while!!! Would you like pink or black shrimp today ma'am? 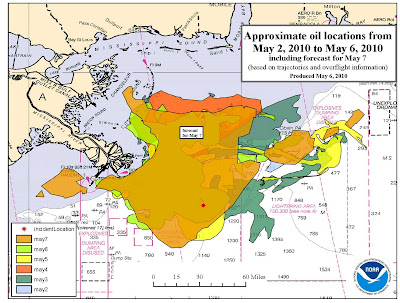 According to many news sources, the US government (the Minerals Management Service, specifically) exempted BP from an environmental impact analysis last year. They gave them a "categorical exclusion" from the NEPA they should have completed in 2009 for this rig. By definition, a categorical exclusion means "a category of actions which do not individually or cumulatively have a significant effect on the human environment." Hmmm...really? Do you sincerely believe that oil rigs drilled into the sea floor in the Gulf of Mexico have no potential significant environmental impact? What's the worst that could happen, right? It's unfortunate that the lobbying efforts of big business like BP have encouraged the government to turn a blind eye to bending the rules. Sure, we need domestic oil sources...I get it and I'm not totally against it. But there is a process that needs to be adhered to to get the permits to build things like oil rigs. And that process should be followed correctly. Shortcuts and exemptions should be examined more carefully. Yes, we need business and there will be environmental impacts for the sake of progress in the US. Even I can admit and accept that. But let's do it right. If there was a way to avoid this massive "spill," then those steps should have been taken. Is it better to put down the capital for safety and double shut-off precautions during the building process, or is it better to pay upwards of $8 billion to clean up this calamity...not to mention possibly affect hundreds of beaches, preserves, wildlife species, marine species, and human jobs?? I wonder how BP would answer that question now?

So I'll give you an update of some of what is being affected by the spill so far:
For more info check out this link for a straight forward Q&A about the disaster. 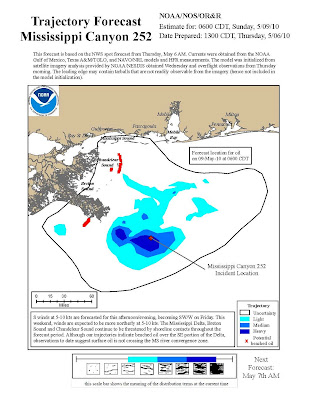 Also, take a look at the NOAA website for up-to-date information about the oil spill plume and efforts taking place to control the damage. I'd like to thank my friend Mark for all of his hard work flying NOAA aircraft to take photographs and gather data from the spill. I know you're not sleeping much right now, but it's good to know that people like you are out there assessing the issue. Be careful!

Now it's our turn. I'm trying to figure out the best way that I can help right now too.
Posted by Unknown