If you've been following me, you know that I have been working for about 6 months for Florida Atlantic University. I have been a biological research technician as part of a three person field crew that is conducting research in the Everglades ecosystem of Florida. Specifically, we are collecting samples that will be used to assess wading bird prey concentrations during this season. What are wading bird prey concentrations, you ask? Well, when we talk about wading birds we are referring to birds that feed by wading into deep pools of water including: white ibis, glossy ibis, great egret, snowy egret, great blue heron, little blue heron, and roseate spoonbill in the Everglades. And the prey concentrations just refers to all the little things that these birds eat such as shrimp, crayfish, fish, macroinvertebrates, amphibians, insects, snails, etc. We sample for these prey species throughout the Everglades once the ecosystem has dried down to capture a representative sample of what prey species are available during the dry season. The idea is that as the ecosystem dries down each dry season (October through May) prey species get concentrated in small pools of water. This makes fishing for prey easier for the birds...kind of a "shooting fish in a barrel" concept. And this research is an attempt to correlate prey species concentrations with wading bird nesting efforts. The general question is: Do birds nest more when the Everglades ecosystem dries down, thereby making prey more available during nesting season? The work I'm doing is on the ground level of the prey concentration side of the project. There are others looking at the bird nesting efforts too. It's a very complex and extremely fascinating project.

Since I have been a bit lax on providing info about my amazing field job at FAU, I will try to post more now. Now that the rainy season has begun, our field sampling season is over and we are back in the laboratory for now. So I will start a series of posts that are a look back at this field season. 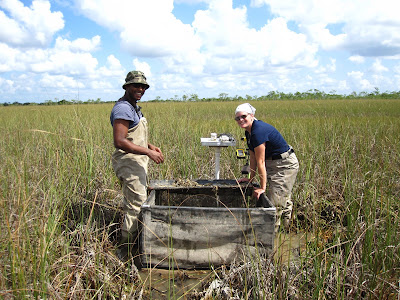 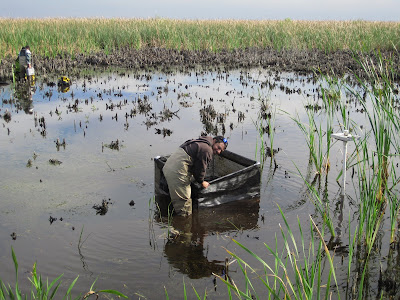 That square black thing is our "trap" that we use to catch fish, shrimp, crayfish, amphibians, insects, and any other thing that wading birds would eat. 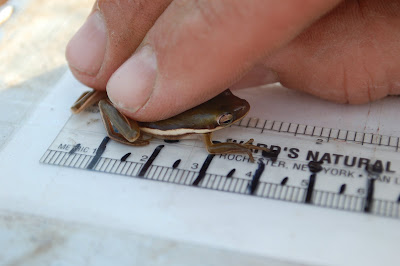 Do you ever feel like you're being put to a test? Are you worried that you're not measuring up? 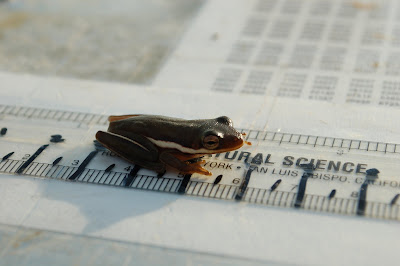 Maybe that's how these little squirrel treefrogs feel. As we extract fauna from our throw trap we measure most amphibians and re-release them into the wild. This 3cm squirrel treefrog (Hyla squirella) held still long enough to be photographed and well documented. This particular individual is a dark green color, but this species can change colors like a chameleon. It was noted that in the previous year, these same frogs were especially dark brown. This year, the majority of the frogs we found were a very light green color, some almost yellow green to match much of the dead sawgrass and eleocharis.
Posted by Unknown