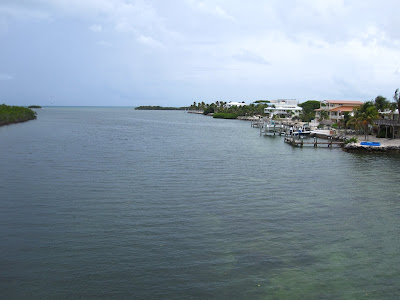 After a particularly rainy and somewhat sleepless night at John Pennekamp State Park, I reassessed my gear at 6am. I was high and dry in my tent (thanks Anni for letting me borrow your awesome tent!), but of course the things I had left outside to dry were soaking wet. These included my shoes, socks, bathing suit, shorts, and both of my small towels (one was meant for freshwater showers, the other for drying off after dips in the ocean). Bummer! And the rain continued as I packed up the tent, folded it on the dripping picnic table, and strapped it to my soaking bike. Once I had loaded up my bike crate with my well-sealed backpack, I hung the wet clothes and towels from the back of the crate to blow in the wind and hopefully dry before the next evening. Well, at least I was warm. At this point, I agreed to accept the wetness, and hopped on my loaded bike to head out. Considering it was only 7am, the park rangers weren't even at the entrance yet to check me out, so I snuck out the main gate and began my 100+ mile ride southeast to Key West!

I was quite surprised to find that there are an extensive network of bike paths throughout the Florida Keys. I even came to find out that this network has been linked and is now called the Florida Keys Overseas Heritage Trail. When the trail is great, it's amazing; it is beautifully paved, straight, surrounded by landscaped or natural habitat, runs over fishing bridges separate from the main traffic, and is well marked. When the trail is bad, it's terrible; it can be nonexistent, bumpy to the point that it rattles all the bolts on your bike loose, switches sides of the highway without proper crossings, and sometimes just plain ends with very little warning. The portion that runs through Key Largo is the latter, especially after a rain. I found that the surface water runoff from US-1 in Key Largo ponds on the bike route. After my initial chagrin, I decided "what the heck!" My shoes were already soaking wet, my morning was cool but humid, and I have fenders on my Trek Allant bike to save me from the dreaded back-stripe. So before you know it, I was riding through the puddles, which sometimes came up to the middle of my bicycle gears, sticking my legs out to the sides, giggling with delight, and smiling from ear to ear. It was 7am, I looked like a fool, but I was having a ball doing it! Mind you, I was soaking wet, covered in a film of white mud from the puddles, and still looked very much homeless with wet clothes and shoes hanging from my pack. The heavy morning traffic (yes, lots of big trucks at this time) must have been chuckling at the hilarious site.

The majority of the day was overcast and humid. I was thankful for the cloud cover, as it saved me from the glaring sun and the intense heat I had expected. I rode about 16 miles in the morning before taking a break. My first stop of the day was at the Lorelei Cabana Bar which had been recommended to me by a few friends. and checking on my afternoon plans. While the local fisherman drank coffee, I decided to order my first beer in the islands. Yes, it was 10:30am, but I was already on island time! 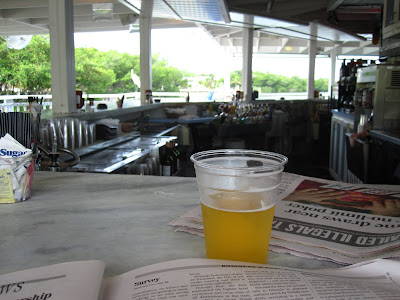 The big attraction to the Lorelei Cabana Bar is docked behind the bar: 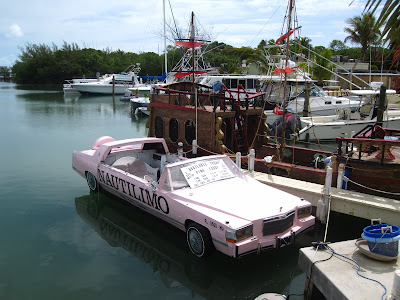 It's a floating limousine called the Nautilimo! The same owner also owns the pirate ship next to it. 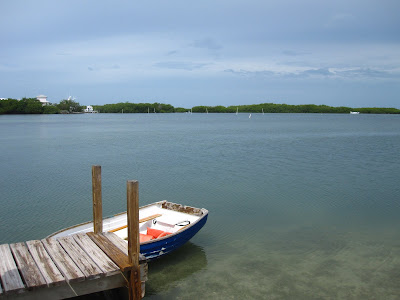 View from the back tiki bar at Lorelei Cabana Bar
Later on down the road, I found a local artists' village, called the Rain Barrel, with lots of local goodies. Fortunately for my wallet, I was saved from buying lots of great art by my limited carrying abilities. 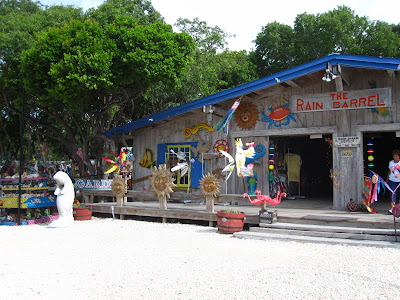 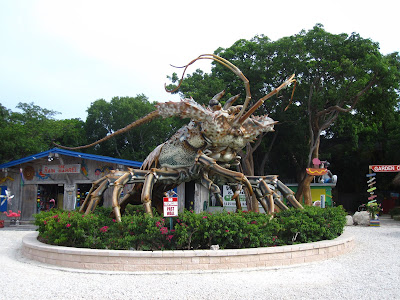 This massive Florida Spiny Lobster sculpture in front of the village makes the artist shops hard to miss.

After a little bit of shopping, I was back on my bike, riding through puddles.

I had found that a few of the National champion trees were located on Lignumvitae Key, a botanical state park located on a key just off of the main keys that is accessible only by boat. After having called ahead a week before, I was particularly excited to see the trees on such a secluded and protected island. The park staff had informed me that most of the rangers knew the locations of the champion trees and they could probably show them to me during a tour, which took place at 10am or 2pm. I was aiming for the 2pm tour and planned to catch a ferry from Robbie's Marina around noon. Within about 7 miles of Robbie's Marina, I decided to give them a call to verify the launch time. Much to my surprise, they informed me that Lignumvitae Key Botanical State Park is not open on Tuesdays or Wednesdays (this was Wednesday June 30)...DOH! Dang! Now what? I kicked the dirt with my feet for a few minutes, contemplating my bad luck and poor planning. I couldn't believe that I had not only missed the Soldierwood in Key Largo, but now I was going to miss these national champions that are on Lignumvitae Key:
I can only hope that someday in the future, I will have the privilege to see some of these amazing trees on Lignumvitae Key. Preserving the high biodiversity on this 280-acre island is extremely important and I am happy that the state of Florida conserves this precious land.

After a quick pity-party and my first taste of succulent mango from John Pennekamp State Park on a channel overlooking the bluest water I've ever seen, I realized that I had nothing to regret on this adventure! 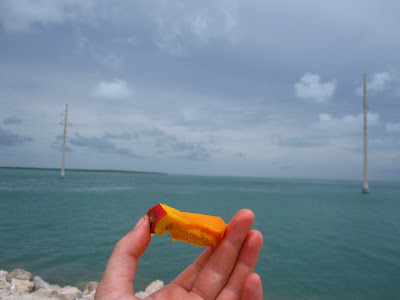 I was doing this bike trip as an adventure, an exploration, a purely relaxing journey through paradise. And what are adventures all about? Being flexible, going with the flow, finding spontaneity in crushed plans. So that's what I did. I still had about 15 miles to go before I needed to be at Long Key State Park to register at my campground there. So I started peddling, slowly south again. I say slowly, because I wasn't in a hurry to get anywhere, instead, I was looking for my next adventure. 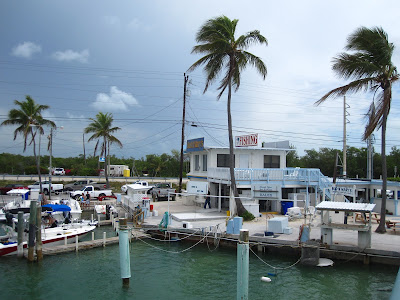 They patiently told me about their snorkeling trips for the day, which would have lasted until about 4:30pm. I was hesitant to go on a trip that was so long, considering I still had about 13 miles to ride to get to my campsite for the night and I wanted to make it before the rangers left and certainly before dark. As I contemplated this idea, I walked outside and to the roof of their covered docks to watch the 5 foot long tarpon roll beneath the pilings. If you've never seen these muscular fish lurking beneath you, let me tell you, it's a sight to be seen. They are so large, yet so graceful that they become mesmerizing. I could watch their massive scales shine and dance in the sunlight for hours. I was still undecided, so I continued on my way.

My next stop was Robbie's Marina on Lower Matecumbe Key, the hub of the ferry that I had planned to take to Lignumvitae Key. 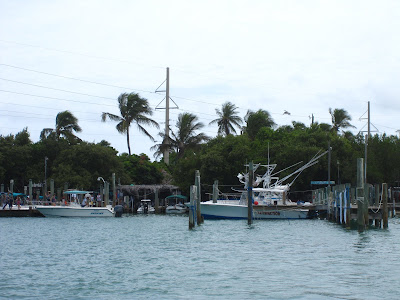 After inquiring again about the snorkeling for the day, I finally decided that I would do it. Sure, the trip got back late, but I knew I could make it to the camp in time, and I really wanted to do something exciting that day. While I waiting for my 3pm snorkeling trip, I had a few beers with the friendly and well informed bartender, Jeff, who also recommended the fish tacos for my lunch. I can still taste the yumminess of those fish tacos! The fresh Mahi Mahi they used on them was so juicy that it was dripping from my chin as I devoured my meal. This marina (like many in the rest of the keys), feeds tarpon from it's docks and attracts a large amount of these huge fish. 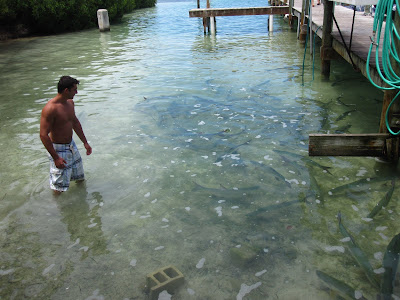 Look how huge these fish look next to this guy! 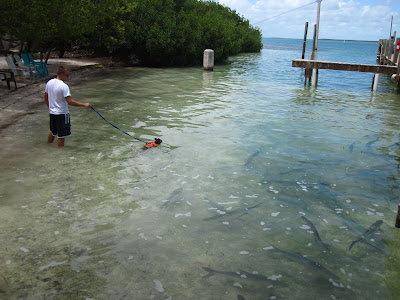 And this guy, much to his girlfriend's dismay, used their tiny dog as bait to lure in the fish.
The snorkeling trip was amazing!! I saw every color combination, shape, and pattern of fish imaginable, in schools and individually, at about 10 to 30 feet deep, very clear water. The trip was on a large catameran with about 30 people from the Marina. We dove on Alligator Reef, just south of Islamorada. The coral there was beautiful (brain coral, fan coral, and more) but lacked in abundance and appears to be heavily damaged in areas. I also saw a stingray and a 3 foot nurse shark (I chased her and she hid beneath the rocks). The weather remained perfect for my liking; slightly overcast, a nice breeze with 2 foot rolling seas, and perfectly clear water with about 30-40 feet of visibility. 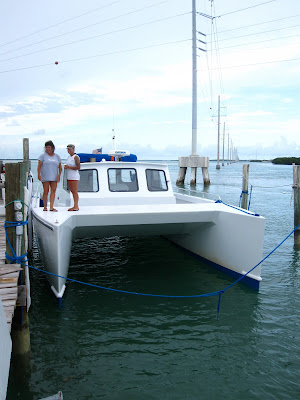 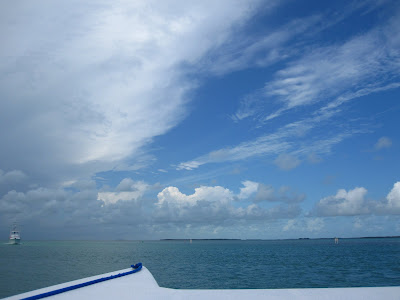 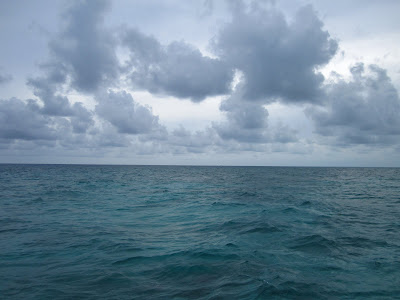 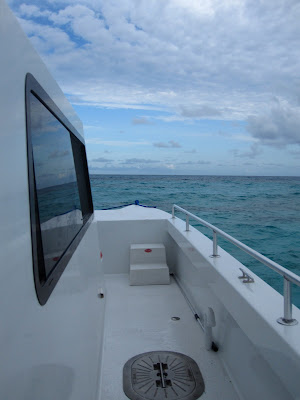 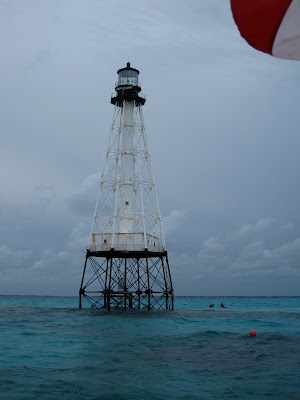 Here is an abbreviated version of the wildlife I saw while snorkeling: