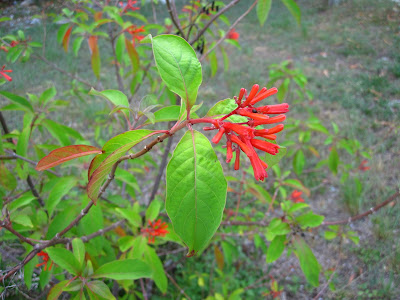 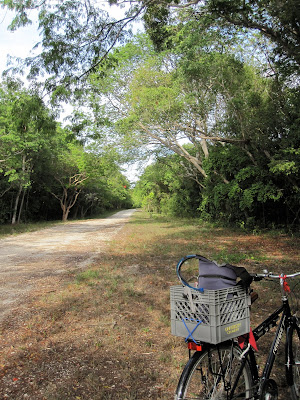 Trail to lime grove. Secret back entrance.
Florida Big Tree Coordinator, Mark Torok, had been kind enough to hook me up with the list of the largest trees in Monroe County, FL at my request. This list included one tree in John Pennekamp State Park, the National Co-Champion Soldierwood, a state endangered species. It boasted a crown spread of 19 feet, a height of 45 feet, and a circumference of 28 inches at breast height. According to the record, this tree was located in the state park, 100 feet east, and 30 feet south of the southwest corner of the lime grove. Fair enough...how hard can it possibly be to locate this champion? 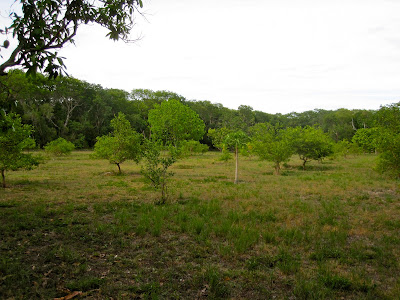 View of the lime grove.

Well, I underestimated the complexity of the thick hardwood hammock habitat and overestimated my tree scavenger abilities. I was directed to the lime grove by the friendly staff of the state park and rode my bike to the area, which was relatively close to the front entrance of the park, yet hidden from, and probably unknown by most of the park visitors. I was excited to discover that this “lime grove” was in fact a functioning grove, maintained by the park, including key limes, mangoes, avocados, guavas, and one papaya tree. 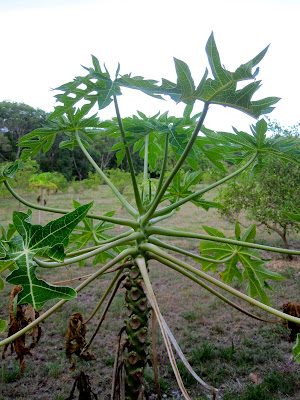 Papaya tree
Geologically, the Florida Keys are composed of a string of exposed, slightly elevated, fossilized coral rock, a sharp, jagged formation known as Key Largo Limestone. Consequently, Key Largo pioneers actually had to use quarter sticks of dynamite to clear patches of ground; blasting holes in the thick, solid coral rock. This grove is a humble, yet very productive 2.5-acre fruit oasis and cultural resource. It holds the title as the last working Key lime grove in the Upper Florida Keys. And I had found it!! How cool! 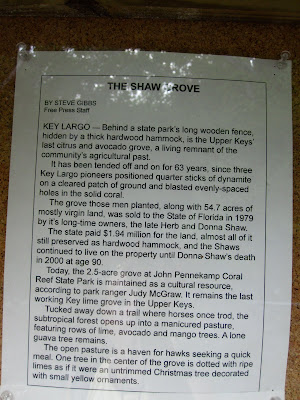 I was so excited about the huge number of mango varieties (if I recall correctly, the signs said there were about 12 varieties in this small area), the beauty of the trees, the unique patterns in the exposed coral rock, and the mystery of this find, that I almost forgot about the Soldierwood tree. I tried my first straight-from-the-tree key lime. I found out later that ripe key limes are almost yellow. Unfortunately, the one I chose was a hard, green lime that puckered my lips, punched me in the back of the throat, but still quenched my curiosity. 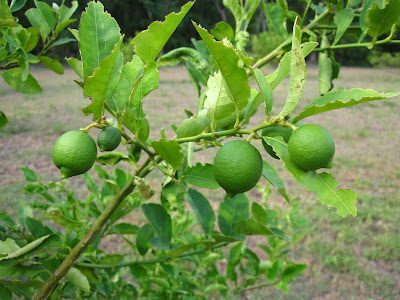 As I walked through the grove to the southwest corner, I eyed some beautiful, ripe, distractingly tasty looking mangoes lying on the ground, ready to be harvested. 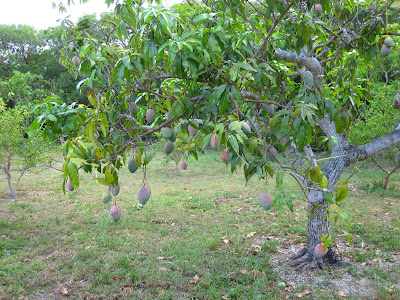 Unripe mangoes hang from long stems like Christmas ornaments on the trees.

I even photographed this one...the one that was to be my first tree ripe mango from the United States (I’ve harvested them in Costa Rica before too). 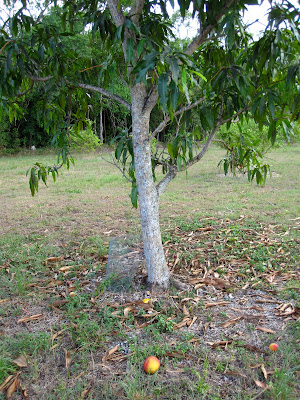 As I pulled myself away from the juicy mangoes calling my name, I found the southwest corner of the grove, grabbed my trusty compass and tried to count my steps to the approximate location of the co-champion tree. I was slowly picking my way through the dense underbrush, attempting to run straight lines, when I heard footsteps in the dried leaves about 100 feet from me. I froze, took inventory of my few weapons and potential escape routes from the hardwood hammock, and followed the sound of the leaves with my eyes, only to find that the resident forest ranger was taking his daily stroll to the lime grove with a large bag and a long fruit picking stick. To my dismay, I stood frozen in the forest while I watched him walk through the orchard and pick each and every beautiful, succulent ripe mango from the ground. 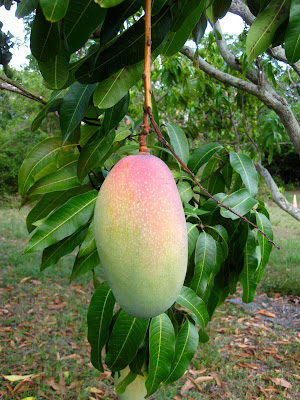 One of the many gorgeous mangoes. Look at those colors!! Like a sunset.
I continued looking for the Soldierwood, but my navigation took me to the center of the 10 foot wide path the ranger had just been walking on. Looking around me, I didn’t see any leaves that looked like those I had hoped to identify as a Soldierwood and I couldn’t be sure that the co-champion hadn’t been cut down for the creation of this path. I was discouraged by my failed search and by the loss of my dinner fruit. I headed back out to the lime grove, trying not to emerge too suspiciously from the forest (although legal, I’m sure it’s not normal for most park visitors to go exploring in the dense, off-trail areas of the hammock). Once in the grove again, I approached the ranger, whose bag of mangoes was bulging with golden, ruby red deliciousness. He confessed that he had no information on the tree I was searching for and in fact, didn’t even know it had existed in this area. Short of calling the entire evening a failure, I waited until the ranger had left before I was able to find the last three precious ripe mangos. I later traded one of these beauties with Gloria and Bud for dinner. 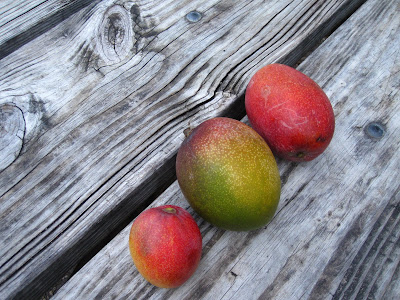 Following the lime grove adventure, I headed back to camp along a walking trail through the hardwood hammock. The walk was lined with coral rock obviously placed as a trail border by the rangers. 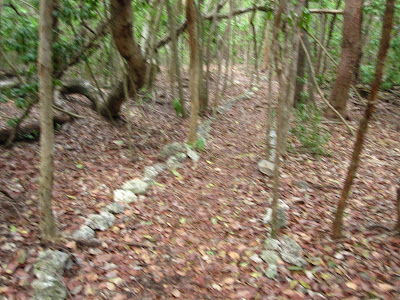 Yes, it's blurry, but you get the point.

Each coral rock was uniquely imprinted with a different coral pattern. 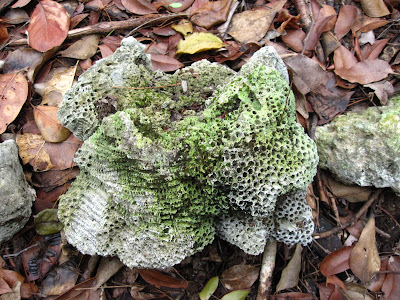 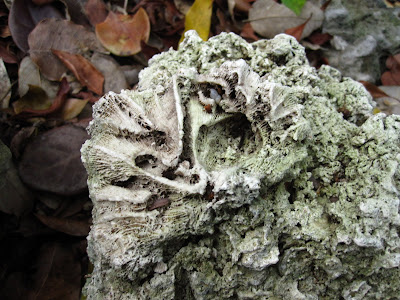 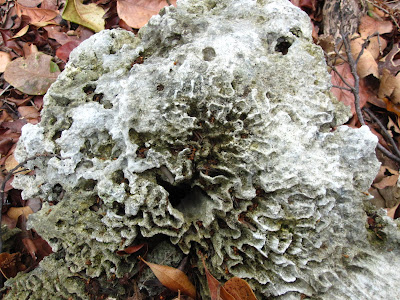 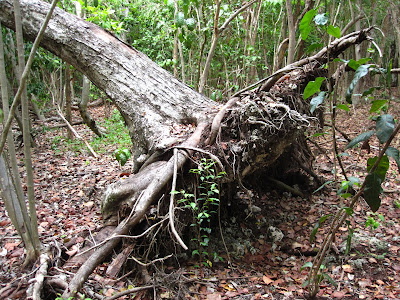 The coral rock is so shallow that trees in the forest have very shallow roots, like this one.

Have this Mangos been as delicious as the one you seved on your Mams birthday?
Great photos and comment!
Monika

Yes! These mangoes were just as delicious as the ones I got for Mom's birthday from the "Robert is Here fruit stand." They might have been even more delicious because I ate these sweet juicy ones during my ride in the hot Florida sun.