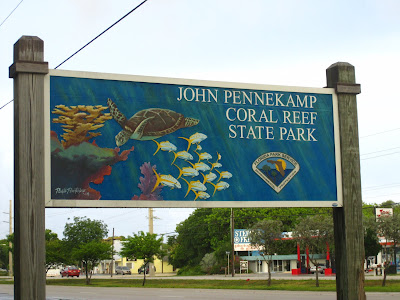 I am officially back from the Florida Keys bike ride and I'm actually already in Maryland, but I will recount the amazing trip for you.

On June 29, I drove my car down to Key Largo, loaded up with my bike and all the gear I needed for the next few days of riding and camping through the Florida Keys to Key West. As I drove south, I stopped for a few provisions at Bass Pro Shop and Target. I needed peanut butter, bread (I already had the blackberry jelly), mace (as demanded by a good friend, thanks Tony!), a new camelback hydration reservoir, water, and some new bike lights (Murphy's Law - mine stopped working the day before). 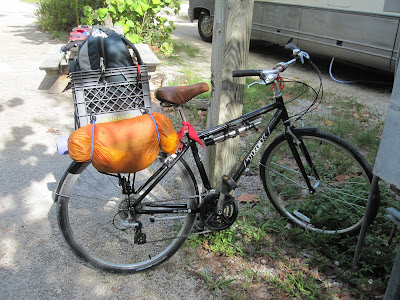 Once in Key Largo, I parked my car at a generous friend-of-a-friend's house (Thanks Linda!!), neatly packed all my gear on the bike, and hopped on my bike to peddle only 5 miles north to John Pennekamp State Park. Although my trip was intended to ride south, I had to ride north the first evening to the first campsite. I made it to the state park, registered as a camper (I had reserved my spot ahead of time on ReserveAmerica), and was finally able to relax and let all the stress roll off my shoulders by 5pm on Tuesday night. 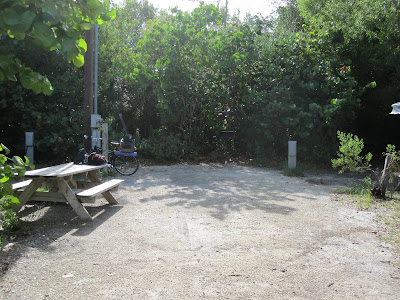 I gleefully rode to my campsite, which was a nice shady site sandwiched between two massive RVs. Considering it was my first night and so many people had cautioned me against the dangers of this ride, I didn't mind the lack of privacy. Instead, I found myself in the midst of a bustling camping area where many of the campers had made their RVs into homes on the park for over a month already. This was a community. As the new kid, I was eyed up and down, questioned by some, and soon accepted into the pack. I knew that I had passed the test when my lovely RV neighbors, on both sides, took it upon themselves to feed me. 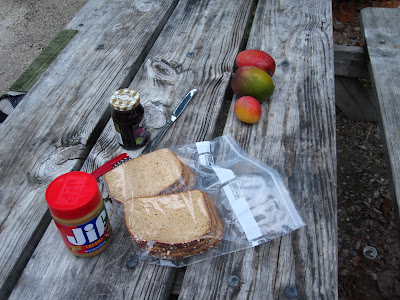 Later in the evening, after some exploration, I was just about to bust into a rustic dinner of PB&J with fresh mangos (more on this later) when I was lured in by beef stew from the neighbors, Gloria and Bud (a sweet older couple who immediately adopted me as a granddaughter). Hmmm...I pondered...PB&J or beef stew. That was a quick decision and before I knew it, Gloria was serving up a brimming bowl of beef stew, showering me with cracker options, and offering me about 5 different types of drinks. As I quietly, yet quickly scarfed down my beef stew, like a stray dog, I listened to Gloria's amazing life. Within 20 minutes I learned that she and Bud had been married for 45 years, had 4 children, 10 grandchildren, how they had met and started courting, where they lived, all the embarrassing things that Bud had done within the past year, their occupations, and their health conditions. As soon as my spoon hit the bottom of my empty bowl, Gloria looked at me with questioning eyes and eagerly asked "would you like another bowl"? Thanks, but I'm stuffed! Without taking a breath, she launched back into more entertaining grandmotherly stories. I felt right at home. Soon, Bud came back from an evening of snorkeling with the kids and having heard that stories were being told of him, he quickly told me his side of each embarrassing story to his defense. I smiled, belly full, feeling like part of the family, and soon excused myself to get some sleep. What a lovely couple!

The John Pennekamp State Park campsite was wonderful. During my explorations, I discovered there are docks here with fishing, snorkeling and diving boat charters available, a concession stand that is open during the day, trails, several snorkeling beaches with a ship wreck, a lime grove, nice bath houses, and even laundry facilities. Prior to the beef stew binge, I explored the property to find the largest Soldierwood tree, which was allegedly on the property. I not only found the lime grove (more on this soon), but I also decided to take a plunge in the crystal clear water on the snorkeling beach. 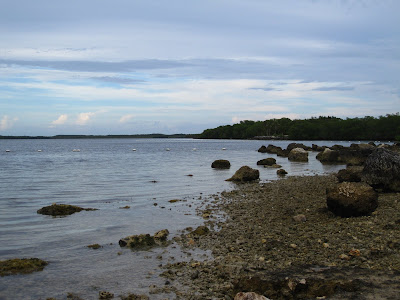 After a long day of driving, sweating, and stressing about life in general, I found myself floating in the warm water just above the old ship wreck. I heard some snorkelers yell to each other about all the great tarpon, snook, and other fish they saw in the water below me, but I was already floating on my back, exhaling deeply, and enjoying the calm. After a few moments to contemplating the craziness of the past few days, I was able to relax and start taking notice of my surroundings. While I was floating in the super salty water, I realized that I was hearing the muffled clicks and pops of hundreds of organisms below me eating their dinners. I imagined crabs, fish, urchins, lobster (yes, there are Florida spiny lobsters), and clams all feasting in the deep waters. I was pleased they were fed well, but it got me to thinking that I should also probably get some chow. 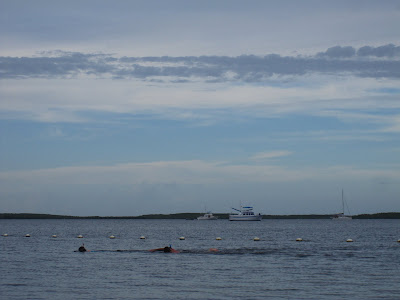 was it not too hot to travel with your bike down to the south?
I like your pictures and your writing very much. I`m looking forward to your next trip.
Monika

It was certainly very very hot! But I had plenty of water and was well prepared to sweat a lot. The evenings in the tent were pretty hot, but tolerable.

I'm glad you are keeping up with my trips! I can't wait to do some Swiss exploring with you too!!