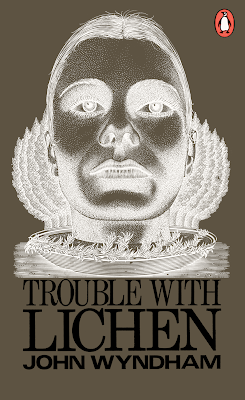 Wow, I just finished reading a book that was recommended to me called The Trouble with Lichen by John Wyndham. It was written in 1960, but it is surprisingly still very relevant to social issues we face today. I`m typically not big on sci-fi books, but this one really hooked me. Despite having been written so long ago, this book fantasizes about what would happen to the global society if scientists discovered an organic and limited anti-aging substance.Can you imagine? Who would get the treatments? How would this change demographics, employment schemes, social benefits, the feminist movement, and our personal relationships?

Not only is this book written beautifully, with simple yet poetic prose, but the political aspect is very engaging. Wyndham uses his characters to play differing sides to the scientific/socio-political debate of what life would be like if we lived centuries long rather than 80 years. PLUS, there is an overarching feminist debate that goes well beyond a sought after "forever-young" potion. Brilliantly written! As a botanist, I can only hope that I discover something one day that causes even a little stir in the scientific community.

Try to get your hands on this book!

Here is one review and another one if you want more information.

And on a related note...lichen are amazing! Though they appear to be one organism, they are actually a partnership between a fungi and an algae.This symbiotic relationship can result in some really beautiful and important lichen groups. Check some out here at the British Lichen Society or the Lichens of North America.
Posted by Unknown