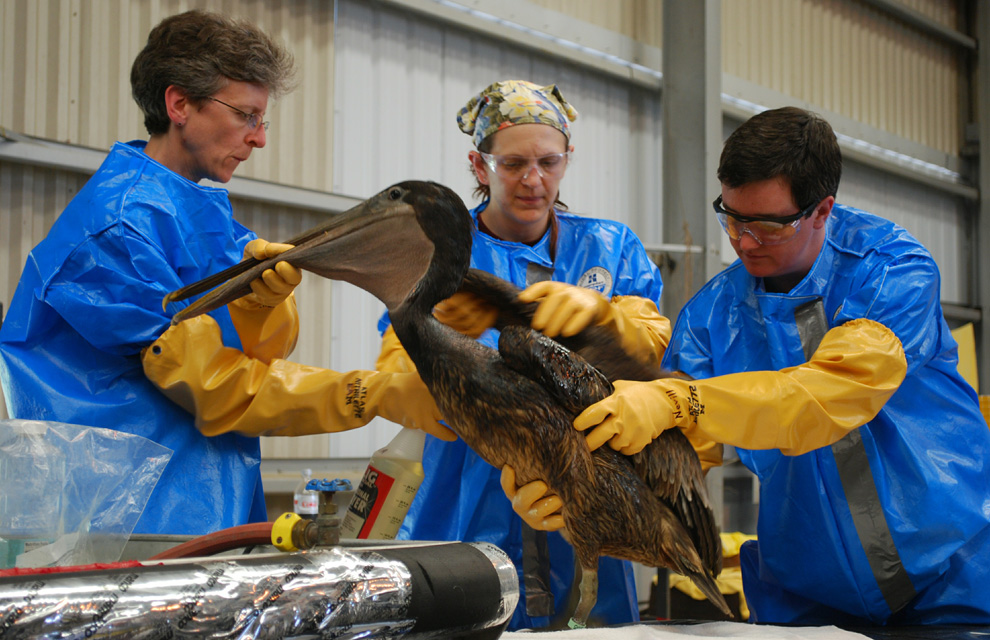 As mentioned before, the far-reaching effects of the BP oil spill in the Gulf of Mexico has not been realized yet. So far, over 65 miles of shoreline have been coated by oil. The containment dome failed. The next idea was to create a containment plug of heavy mud and cement over the leaks in the oil rig. BP aptly named this method "top kill" and this is how it was supposed to work (BP has created a really beautiful website on how their solutions should work...in theory and design). Sadly it also failed. The next hope is that the relief well will help to slow the leak, however the relief well will not be completed for months.

Along the 65 miles of shoreline and the many more that will probably be effected, we are seeing impacts on the brown pelican (like above) which was JUST taken off the endangered list 6 months ago, herons, egrets, and many other seabirds, crabs, shrimp, fish, sea turtles (including the Kemps Ridley sea turtle, the most endangered sea turtle in the world that feeds on the exact spot that the Deepwater Horizons Oil Rig exploded...go figure), dolphins, whales and more. Take a look at this comprehensive list of marine species that the oil spill will effect that was put together by NOAA. The fact that this oil spill will speed the extinction of several endangered species and severely damage populations of thriving species is truly heartbreaking.

Check out more shocking images from the oil disaster in the Gulf of Mexico. It is such a tragedy. President Obama has just opened a criminal investigation on the oil spill. Safety violations such as this should be punished appropriately. The massive loss of jobs, wildlife, natural areas, and other natural resources will hopefully be addressed by the US.
Posted by Unknown